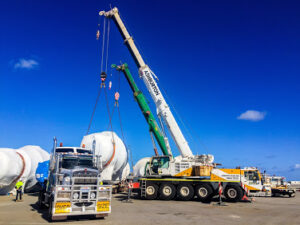 The above photo is of Ashburton Crane Hire in Fremantle WA lifting prefabricated minerals processing plant equipment from a docked ship on to trucks.

A Western Australian lithium company hired two cranes to lift heavy engineering ship cargo from a ship docked at the Fremantle wharf. The synchronised cranes lifted the heavy loads while our low loading-trucks moved in position before road transporting loads to a new lithium plant project in the heavy industrial zone at Kwinana WA, near Fremantle. Our hired cranes followed the trucks from the wharf to the Kwinana industrial zone. Our Freo hire cranes unloaded and lifted into position the heavy lithium mineral processing plant equipment. 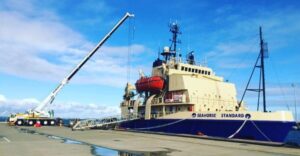 Below is a photo of one of Ashburton Crane Hire‘s Franna cranes loaded onto a ship in Fremantle harbour. It was for a marine lift job off the Indian Ocean coast of North West, Western Australia. 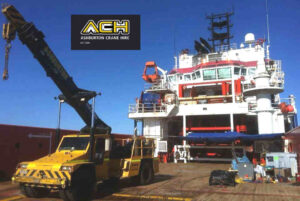 247 Crane hire Kwinana and crane hire near Kwinana at Kwinana Beach for the petrochemical industries.

Get quick crane hire in Fremantle and the Garden Island naval base for crane lifting servers for the Australian navy.

Crane hire at and near the Australian Marine Complex AMC, a crane company service for the Western Australian shipbuilding industry near Fremantle WA.